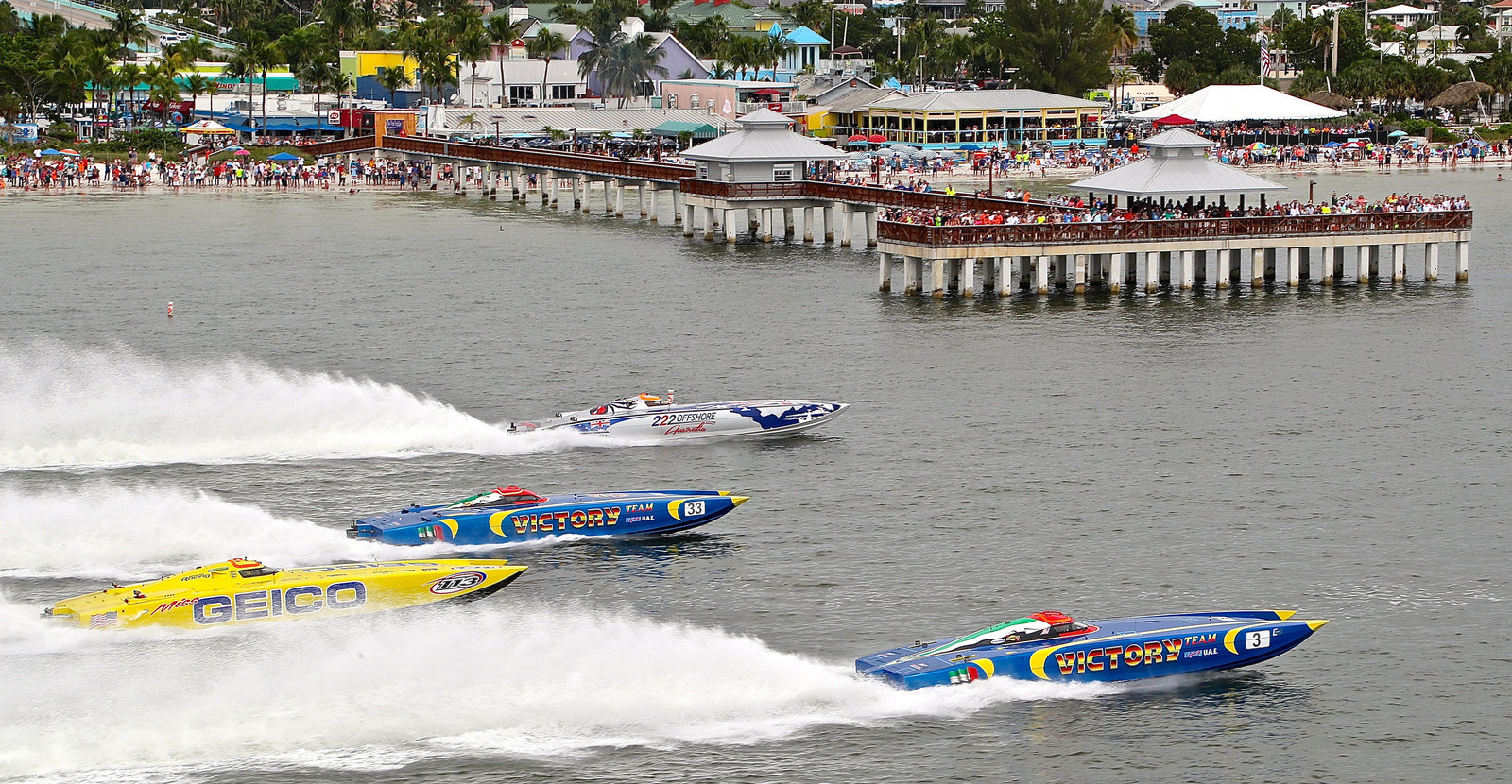 Man and Machine Against the Sea: Hailed as the ‘the world’s most rugged ocean race’ the fabled Miami-Nassau races brought powerboat racing to the attention of the general public and signalled the beginnings of modern offshore racing. These races also provided the sport with its first hero – Sam L. Griffith.

The first Miami-Nassau race, run on 6 May, 1956 was the brainchild of American race car promoter Capt. Sherman ‘Red’ Crise and yacht designer, Dick Bertram. Of the eleven intrepid pioneers who entered this now famous 184-mile race, eight went the distance to complete the race. The first boat home after nine hours 20 minutes, at an average speed of 19.7mph, was the Griffith-Bertram entry, Doodles II, a 34ft wooden Chris Craft with two 215hp Cadillac Crusader engines.

Griffith was a larger than life character who made the sport his own in those early years. He was regarded as ‘the man’ and before his untimely death in 1963 he would win four Miami-Nassau races, break Gar Wood’s 41-year-old Miami-New York powerboat record and capture the Around Long Island Marathon. Many have since sought to emulate his skills and when Class 1 came of age in 1964 with a sanctioned World Drivers’ Championship it was his name that was selected to adorn the trophy that is today the sport’s biggest prize.

During the 1950s the Americans had the sport to themselves laying claim to the three major offshore races in existence, the Miami-Nassau, the Around Long Island Marathon and the Miami-Key West. But in the early 60s Europe entered the fray to challenge the Americans. Publisher Sir Max Aitken, inspired by the Miami-Nassau, established the Cowes-Torquay on August 19, 1961, with victory in the inaugural 179-mile race going to Tommy Sopwith in Thunderbolt.

A year later the Italians added their challenge with the staging of the 198-mile Viareggio-Bastia-Viareggio, which was won by an Italian ex-navy submarine commander, Attilio Petroni, in A’ Speranziella. Over the next thirty years an enduring struggle ensued between the three founding nations for racing supremacy.

In the 20 years following its recognition by the Union Internationale Motonautique (U.I.M.) and the inception of the Sam Griffith Trophy in 1964 the Americans were at the forefront of the sport’s technological development.

Jim Wynne, Dick Bertram and Don Aronow led the way with the Daytona, Mercuiser and Aeromarine powerplants reigning supreme. During this period the Americans posted thirteen champions and the Italians just six. The lone exception was Wally Franz, a Brazilian who lifted the title in 1975, but he succeeded with an American boat, engine, transmission and throttleman – hardly a Brazilian affair! Indeed, it was not until Italy’s Francesco Cosentino took the 1978 title in a boat designed by Don Shead and built on the Mediterranean at Viareggio, the spiritual home of Italian offshore powerboat racing, that a Class 1 World Champion won the title in equipment not of American origin, nor assembled and tended by American engineers.

The decade of the 90s witnessed the emergence of the Michael Peters designed, Tencara and Victory built hulls that dominated the honors lists with the American Sterling, the Italian Lamborghini petrol and the Seatek diesel engines sharing the power battle.

The last year 30-years have not only witnessed an evolution in the technical side of the sport, but a major overhaul to the overall make-up of the championship, becoming a far more international affair. In the early years, it was commonplace for teams to field two boat entries, competing in as many as 18 races at venues across America, Australia, South Africa, Sweden, France, Italy and the UK.

Although the financial austerity in the late 70s and 80s seriously hit the championship, leading to one event hosting three races in a single location, the number of competing nations nevertheless continued to increase to include Argentina, Brazil, Finland, Japan, Jordan, Kuwait, Malaysia, Monaco, New Zealand and Norway.

In 1992 the Championship reverted to a multi-event competition and more importantly in the following years the diversity of nationalities claiming the World Drivers’ Championship swelled in numbers including America, Great Britain, Italy, Monaco, Norway, Saudi Arabia and the UAE.

Thirty three titles have been won by Americans, 19 by Italians, 22 by competitors from the UAE, eight by a Briton, six by Norwegians, two by competitors from Monaco and Puerto Rico and one each by representatives from Brazil, Finland and Saudi Arabia. Five champions have taken their titles as novices in their first season in Class I racing and five driver/throttleman partnerships have managed back-to-back titles, Bonomi/Powers in 1973/4, S Al Tayer/Serralles in 1995/6, Gjelsten/Curtis in 2002/3/4, Al Zaffainn/Bin Hendi in 2009/2010/2011 and Al Zaffain/Al Marri 2012/2013

Gjelsten and Curtis are the only partnership to win the title five times - including the hat-trick 2002, 3, 4 - and Steve Curtis the only man to clinch the world title eight times. The world title was not awarded in 1990, as a mark of respect for Stefano Casiraghi who died whilst defending his title in Monaco.

Al Zaffain and Bin Hendi is the only other partnership to complete a hat-trick of World titles, Al Zaffain the only driver to win six back-to-back World titles.

Nineteen titles have been won in monohulls and 31 in catamarans. Of these winning boats, 38 have been built in GRP, eight in aluminium and four in wood. Petrol engines have powered 43 winners and diesels the remaining seven.

Propeller design has seen the early three-bladed bronze wheels superseded by stainless steel props of up to six blades for maximum efficiency and a top team might carry twelve pairs of props of differing pitches and diameters to accommodate differing sea conditions, fuel loads and handling characteristics.

Speeds have altered beyond all recognition. In the early 1960’s, races were regularly won at averages of below 30mph (48km/h) but it was the advent of catamarans in the 1980’s that allowed the magic barrier of 100mph (160km/h) to be regularly exceeded and now, winning averages of 125mph (200km/h) or more are not unusual.

This quest for speed has produced boats, engines and transmission systems which are inevitably more sophisticated and the use of Fibre Reinforced Polymer (FRP) with advanced composites using Kevlar and carbon fibre has made them safer.

The crews of yesteryear stood up to the elements as they struggled with navigation, throttles and the wheel, taking a battering from the elements with little protection. Today’s drivers and throttlemen enjoy the advantages of being strapped securely into body-hugging seats within safety cells beneath lexan canopies borrowed from the aerospace industry, whilst monitoring their progress on equally advanced global positioning systems (GPS).

Yesterday’s racers were amateur sportsmen and women, pioneers who looked the part. Today’s crews wear fireproof overalls, driving boots, have helmets plumbed with intercommunicating radios and compete in boats that only go afloat to test or race and are prepared and maintained by a crew of professional engineers.

These and all the other factors have shaped Class 1 powerboat racing into what it is today. But one aspect hasn’t changed in the past forty-odd years of action - the sea.

And for all the progress made, and the highly professional sport that it has become, Class 1 still shares the same ingenuity and ethos of its founders – man and machine against the sea.